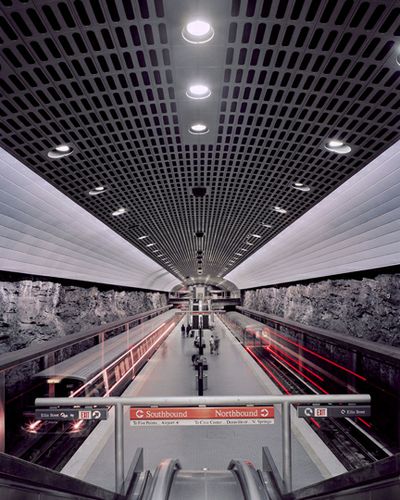 Atlanta is known for its many diverse neighborhoods across the city, and its mass transit system, MARTA, allows for easy access to many must-see spots. Whether visiting world-class attractions or enjoying retail therapy, a quick ride on MARTA gives city-goers an easy way to traverse the Big Peach.

Lenox Station
Convenient to two shopping malls, Lenox Square and Phipps Plaza, the Lenox MARTA station sits in the heart of the city’s top retail shops and boutiques. Both properties are walkable from the station and include everyday names like White House Black Market, Macy’s and GAP, along with high-end shops including Burberry, Louis Vuitton and Prada. The station is also convenient to many of Atlanta’s well-known restaurants such as St. Cecelia, South City Kitchen and Seven Lamps, making a bite to eat easy to come by.

Buckhead Station
To get a taste of Atlanta’s past, a ride to Buckhead station and a five-minute Uber or Lyft trip will lead to Atlanta History Center. The campus encompasses the Atlanta History Museum, Swan Coach House, Smith Family Farm and 22 acres of gardens, woodlands and trails tucked in the middle of the prestigious Buckhead neighborhood. Here, visitors can learn the ins and outs of the city’s past, Georgia’s role in the Civil War and stroll through locations featured in “The Hunger Games” movie series.

Arts Center Station
Arts Center station is true to its name and stands surrounded by Atlanta’s renowned museums, art installations and performing arts venues. Woodruff Arts Center houses High Museum of Art, Alliance Theater and Symphony Hall, home to Atlanta Symphony Orchestra. While High Museum of Art boasts a large collection of contemporary and classical exhibits, nearby Museum of Design Atlanta hosts collections of work dedicated to all things design. For a more unique experience, a quick walk down the street from Arts Center station leads to Center for Puppetry Arts, one of the largest organizations dedicated to the art of puppetry in the U.S.

Midtown Station
A 10-minute walk from Midtown station puts visitors in the midst of one of Atlanta’s largest parks and greenspaces, Piedmont Park. In addition to its extensive running trails, athletic fields, pool, pond and multiple playgrounds, Piedmont Park hosts some of the city’s largest outdoor events including the annual Dogwood Festival, Music Midtown and seasonal farmer’s markets. Here, you will be a few steps away from several trendy restaurants including Einstein’s, Henry’s Midtown Tavern and Empire State South – all popular spots for weekend brunch. Midtown station is also conveniently located near the Margaret Mitchell House, which served as the home to the author that gave the world Scarlett O’Hara and brought literary fame to the city through her novel “Gone with the Wind.”

Peachtree Center Station
In addition to providing easy access to Atlanta’s major hotel corridor, Peachtree Center station is just blocks away from the city’s convention and entertainment district. Within this district lies Atlanta’s top attractions including Centennial Olympic Park, CNN Global headquarters, World of Coca-Cola, Georgia Aquarium, College Football Hall of Fame and Center for Civil and Human Rights. The kid-friendly and internationally recognized attractions make this a popular starting point for families and first-time visitors to the city.