First and Goal in Atlanta – Capital of College Football 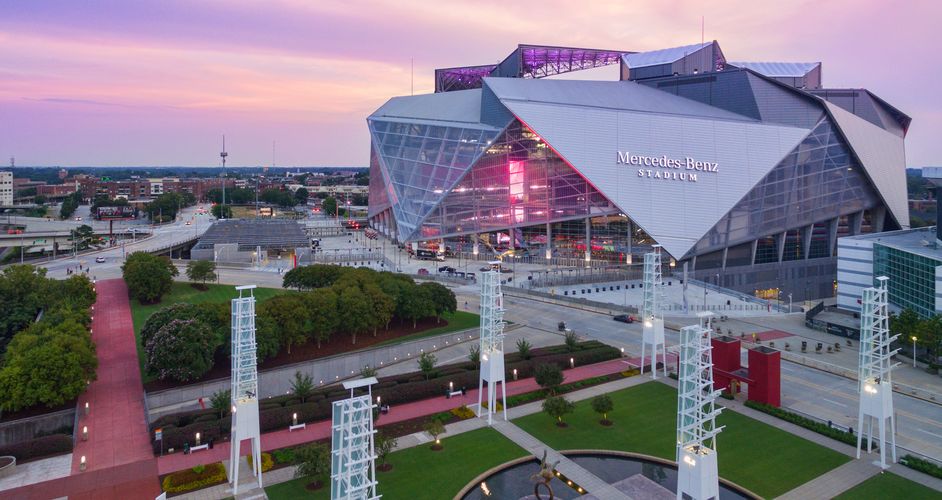 Atlanta reigns as the capital of college football, and the city’s history with the sport is expansive. On Feb. 20, 1892, Piedmont Park held the first Auburn University vs. University of Georgia football game, now known as the Deep South’s Oldest Rivalry. John Heisman, namesake of the illustrious Heisman Trophy, coached the 1917 Georgia Tech Yellow Jackets to a national championship, the first for a Southern team. In 2014, the College Football Hall of Fame relocated to Atlanta as a shrine to the greatest to ever play or coach the game. Atlanta’s football legacy continues with plenty of pigskin action to enjoy.

This year heralded the opening of Mercedes-Benz Stadium, a facility designed with fans in mind. The new stadium kicked off the start of the season, hosting to two prime-time games and will host several more before the College Football Playoff (CFP) National Championship on Jan. 8, 2018. The first college football games played here drew a total of 151,437 fans to Atlanta, including two sellouts for Georgia Tech vs. Tennessee and Florida State vs. Alabama, the latter hosting a record crowd of 76,330 for the kickoff game.

The 26th annual Southeastern Conference (SEC) Championship features a matchup between western division champions Auburn University and eastern division champions University of Georgia, set for Dec. 2. Deep South’s Oldest Rivalry rematch will be the first SEC title game played in Mercedes-Benz Stadium, which hosts the event through 2026. The winning team is expected to earn a spot in the College Football Playoff.

Bowl season begins in Atlanta with the third annual Celebration Bowl. The championship-style game between the Mid-Eastern Athletic Conference and Southwestern Athletic Conference champions will be broadcast live on ABC at noon on Saturday, Dec. 16. The Celebration Bowl celebrates the heritage, legacy, pageantry and tradition of historically black colleges and universities.

First held in 1968, the Chick-fil-A Peach Bowl is the ninth-oldest bowl organization, and takes place in Atlanta each yeah. The contest celebrates its golden anniversary with the 50th iteration on Jan. 1.

Atlanta welcomes fans from across the country Jan. 8 when the top two college football teams in the country compete in the CFP National Championship game. The city rolls out the red carpet with events for fans such as musical performances, Championship Tailgate Plaza, Taste of the Championship and Playoff Fan Central. This will be the closeout college game of the season held in Mercedes-Benz Stadium, crowning the best team in the nation.

The momentum continues as the city gears up to host Super Bowl LIII in 2019, making it an exciting time for football fans in Atlanta.