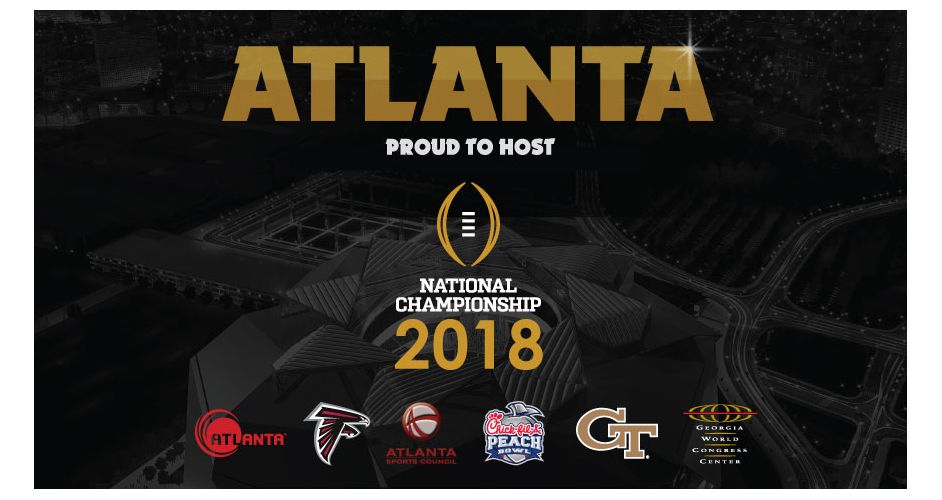 “We are thrilled to host the College Football Playoff National Championship in 2018,” said William Pate, President and CEO, Atlanta Convention & Visitors Bureau. “Atlanta is a great city for championships, especially with the addition of Mercedes-Benz Stadium. We feel as though Atlanta’s infrastructure and collaborative hospitality community are well-suited for this world-class event.”

Leaders from around the Atlanta community teamed up on the proposal which was submitted this past May, and Atlanta was ultimately selected over Houston, Miami and Santa Clara. The Atlanta Bid Committee included representatives of the Atlanta Convention & Visitors Bureau, Atlanta Falcons, Chick-fil-A Peach Bowl, Georgia Tech and the Georgia World Congress Center Authority.

“This is a very exciting day for everyone involved and a huge win for the Atlanta community,” said Dan Corso, Executive Director of the Atlanta Sports Council. “The bid process, which began in February of this year, was truly a team effort and we could not be more proud of the group of partners we have here in Atlanta. Together, we look forward to working with the College Football Playoff to host an unforgettable event and showcasing all that Atlanta has to offer as a host city.”

As part of Atlanta’s pitch, the Atlanta Bid Committee focused on the unique qualifications that set Atlanta apart, such as the accessibility with the world’s busiest airport and public transportation options, downtown walkability to hotels and world-class attractions like Mercedes-Benz Stadium, College Football Hall of Fame and the National Center for Civil and Human Rights. All of these combine to uniquely position Atlanta as a first-class, fan-friendly host city.

“We are excited and proud to host the 2018 College Football Playoff National Championship in Mercedes-Benz Stadium,” said Arthur Blank, owner of the Atlanta Falcons, Atlanta United FC and Atlanta Falcons Stadium Company, developer and operator of Mercedes-Benz Stadium.  “We promise to offer a first-class experience for teams, fans, media and business partners, and we will do everything we can to take this championship game to the next level in 2018.”

Atlanta is also home to the Chick-fil-A Peach Bowl who is part of the College Football Playoff’s six-bowl semifinal rotation, and is slated to host its first Playoff Semifinal on December 31, 2016, along with the Fiesta Bowl.