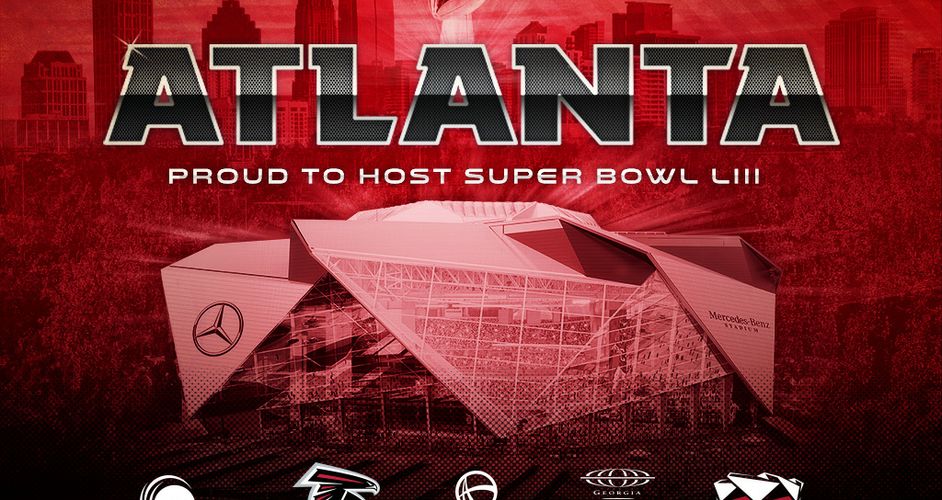 The National Football League (NFL) announced today that Atlanta has been selected to host Super Bowl LIII. The February 2019 contest will be played in the new Mercedes-Benz Stadium which is set to open in June 2017. This will mark the third Super Bowl held in Atlanta and the first since Super Bowl XXXIV in 2000.

“It’s a wonderful day for our city and franchise and I know the people of Atlanta and all of Georgia will deliver a spectacular Super Bowl celebration in 2019,” said Atlanta Falcons owner, Arthur M. Blank. “Mercedes-Benz Stadium will be an outstanding venue for the game and with all of the attractions and hotel rooms within a mile of the stadium this is going to be the most walkable Super Bowl ever. Atlanta has truly transformed since it last hosted the Super Bowl in 2000 and I’m grateful to the NFL and team owners for this very special opportunity.”

“I want to extend my thanks and congratulations to the entire bid committee, our local business community and the leaders of our city and state for their strong efforts on this bid,” said Blank. “Mayor Kasim Reed and Governor Nathan Deal have been especially supportive of our efforts to bring events like the Super Bowl to Atlanta and I’m grateful for their vision and leadership in that regard.”

The Atlanta Bid Committee, which was led by the Atlanta Sports Council, Atlanta Falcons, Atlanta Convention & Visitors Bureau (ACVB) and the Georgia World Congress Center Authority, submitted the final bid on April 15. Doug Hertz, president and CEO of United Distributors and Rick Smith, chairman and CEO of Equifax Inc., served as the Bid Committee co-chairs and delivered the successful pitch to NFL owners today in Charlotte. Following the presentation, Arthur Blank privately addressed his peer owners prior to the vote.

“The bid process, which began over a year ago, involved several organizations around the community, and it’s extremely rewarding to see the collaborative effort and hard work pay off,” said Dan Corso, executive director of the Atlanta Sports Council. “We are excited to welcome NFL fans from around the world and showcase all that Atlanta has to offer as a first-class host city.”

“Atlanta Sports Council put together an outstanding bid, and the Atlanta Falcons are delivering a state-of-the-art facility with Mercedes-Benz Stadium,” said William Pate, president and CEO, ACVB. “This powerful combination led to an exciting win for the city, and we look forward to welcoming hundreds of thousands of visitors to Atlanta in 2019.”

The bid presentation was focused on the theme ‘Atlanta Transformed,’ which highlighted the new infrastructure around the city since Super Bowl XXXIV and the $1.4 billion Mercedes-Benz Stadium, currently under construction in the heart of Atlanta. The Bid Committee also emphasized the unique qualifications that set Atlanta apart, such as the downtown walkability to hotels and world-class attractions like the College Football Hall of Fame, the Georgia Aquarium and National Center for Civil and Human Rights.

Super Bowl LIII joins the 2018 College Football Playoff National Championship and numerous Semi-Final games, as well as the 2020 NCAA Men’s Final Four as the marquee sporting events scheduled to be played in Mercedes-Benz Stadium. The SEC will continue to play its football championship game in Atlanta for the next 11 years, moving into Mercedes-Benz Stadium in 2017 after closing out a long run in the Georgia Dome this coming December.