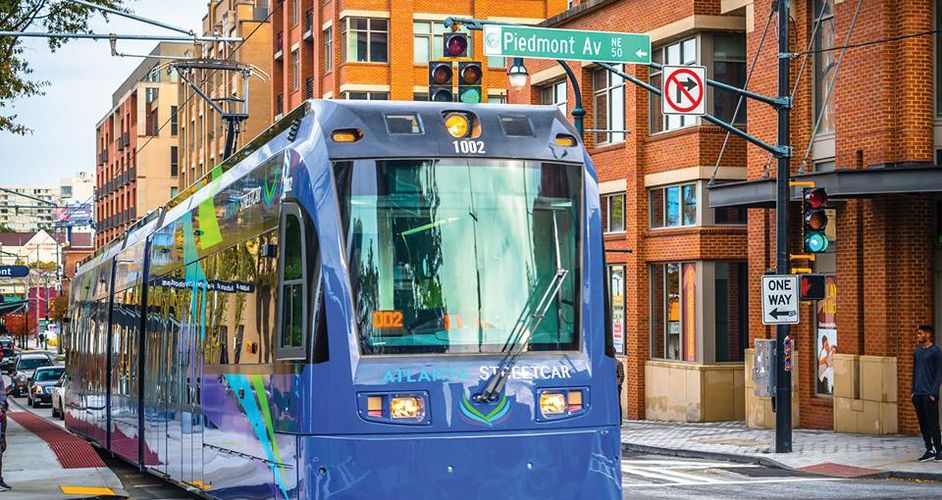 Streetcars have a long history in Atlanta. The first electric streetcars originally ran in the early 1880s, bolstering Atlanta’s reputation as a transportation hub. After decades of planning, a modern electric Atlanta Streetcar is now in service and free for all to ride for the first three months of service. The Atlanta Streetcar creates a 2.7-mile loop connecting downtown’s convention and tourism district to the historic Sweet Auburn district on the east side. Hop aboard with the itinerary below to begin your exploration of Atlanta.

Breakfast: Begin the morning with a cup of coffee and a pastry from the city’s first Jittery Joe’s Coffee Shop in the lobby of The Ritz-Carlton, Atlanta. Then cross the street to catch the streetcar at Peachtree Center.

Stop 1: Hop off at Centennial Olympic Park, where there are endless options for family-friendly fun. Catch a ride on the SkyView Ferris wheel for a glimpse of Atlanta from 200 feet above. Visit Pemberton Place, home to the World of Coca-Cola, Georgia Aquarium and the newly opened Center for Civil and Human Rights. Across the park, head to the College Football Hall of Fame and Chick-fil-A Fan Experience.

Stop 2: Visit Margaret Mitchell Square at Park Place. The cascading waterfall and columned sculpture are a monument to “Gone With the Wind” author Margaret Mitchell.  Behind the park is the Atlanta-Fulton Public Library Central branch, where Mitchell’s library card, the typewriter she used to write “Gone With the Wind” and a selection of books from her personal collection are on display.

Stop 3: Grab lunch at the Municipal Market. This lively culinary complex is Atlanta’s oldest public market. Local vendors, chefs and restaurateurs own the popular stalls throughout the Curb Market, including Grindhouse Killer Burgers, Bell Street Burritos and Sweet Auburn Bakery, among many others.

Stop 4: After lunch, stop at Edgewood at Hillard for a stroll on Edgewood Avenue to peruse the Living Walls murals sprinkled along the streetscape. Living Walls are located throughout the city in an effort to promote, educate and change perspectives about public space in Atlanta communities via street art.

Stop 5: Visit the birth home of Dr. Martin Luther King Jr. at the King Historic District. Learn about Dr. King’s nonviolent principles at the King Center and sit in the pews of Ebenezer Baptist Church, where Dr. King and his father preached every Sunday. On your way out, walk in the footsteps of iconic civil rights leaders at The International Civil Rights Walk of Fame and pay tribute to Dr. King and Coretta Scott King at the reflecting pool that houses their tombs.

Stop 6: Stop at Auburn at Piedmont to learn about the history and legacy of the Sweet Auburn District at the APEX Museum. The APEX Museum is devoted to promoting cultural awareness and the social contributions of African-Americans in Georgia. Visitors can sit in a replica of Atlanta’s original streetcar that used to run during the early 1900s.

Dinner: Hop back on the streetcar and circle back to the Carnegie at Spring stop, where you can travel 73 stories above the city to the Sun Dial Restaurant & Bar atop the Westin Peachtree Plaza or indulge in Southern classics at Pittypat’s Porch.

For more information on activities along the Atlanta Streetcar route visit www.atlanta.net.