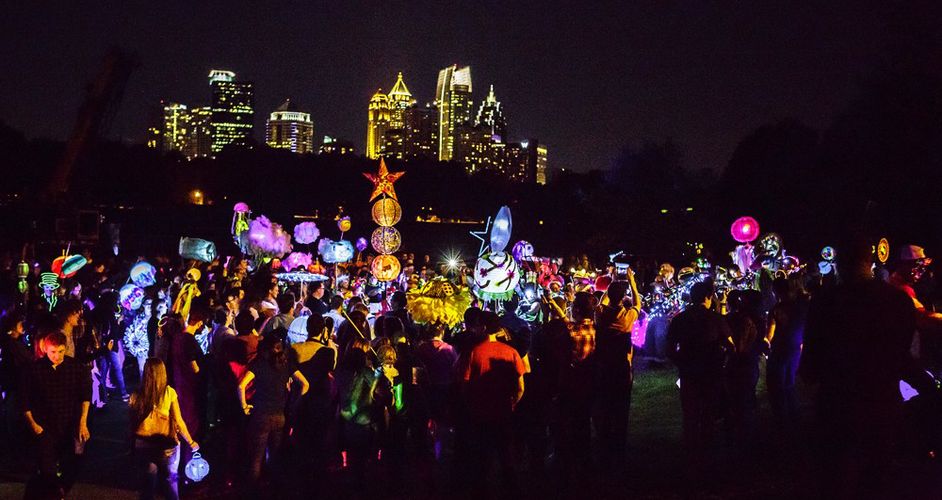 What started as an idea for a civic rehabilitation project in 1999, the old railroad bed- turned Atlanta BeltLine has woven its way through the city and its residents’ hearts. The BeltLine, which will cover 22 miles of rail corridor when completed, serves as a multi-use space featuring trails, pedestrian-friendly transit rail, greenspace, housing and art. Since its official groundbreaking in 2008, several parts of the trail have been developed, each with a unique style. The Eastside Trail, one of the first sections to be completed, connects Atlanta’s Virginia-Highland, Midtown, Poncey-Highland, Old Fourth Ward and Inman Park neighborhoods and features stops at Krog Street Market, Ponce City Market and Historic Fourth Ward Park.

This path is anything but ordinary and is lined with the color and creativity of Atlanta’s local artists. To kick off the yearly Art on the BeltLine exhibit, the BeltLine Lantern Parade leads thousands of marchers down the Eastside Trail with homemade lanterns of all shapes and sizes to welcome the path’s newest installments. This year’s parade will take place on Saturday, Sept. 10.

The parade, which started as one of the BeltLine’s visual installations, has grown from a humble 400 people in 2010 to more than 60,000 in 2015. Participants line the Eastside Trail with paper lanterns of all varieties depicting animals, mythical creatures and colorful orbs and have established the Lantern Parade as the largest in North America.

Artists from all over the city and state set up their exhibits along the trail starting in September and include everything from mixed-media sculptures, to graffiti-inspired walls and musical performances. The exhibit officially ends mid-November and has set a record for the largest temporary outdoor art exhibition in the Southeast.

This year’s parade is expected to be bigger than ever before and will feature six marching bands interspersed between the participants. The procession will end at Piedmont Park where Park Tavern will provide the after party entertainment and refreshments. To walk in the parade, all participates must have a lantern. There are several workshops leading up to the event that will provide everything needed to make a lantern and help light up the night.