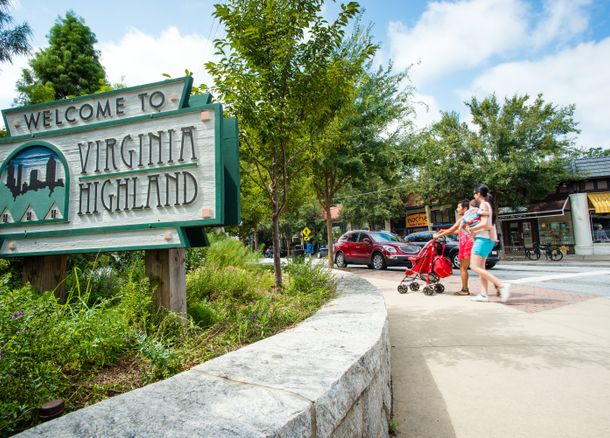 Atlanta isn’t just another big city, it’s an urban landscape made up of nearly 45 intown neighborhoods. Each locale brings a unique flavor to the community and adds personality to the city. Visitors can easily transition from one neighborhood to the next all while experiencing Atlanta’s culture.

The heart of the city is Downtown. Home to a walkable convention and entertainment district with hotels, a multitude of dining options and world-class attractions, it’s the perfect starting point for first-time visitors. Centennial Olympic Park is surrounded by Georgia Aquarium, World of Coca-Cola, CNN global headquarters, Children’s Museum of Atlanta, The National Center for Civil and Human Rights and Chick-fil-A College Football Hall of Fame, all within steps of each other. Downtown is a gateway to any visit and is an ideal place to begin exploring the city.

Midtown is known as Atlanta’s “heart of the arts” and sits along the famed Peachtree Street. Midtown boasts the largest concentration of arts facilities and organizations in the Southeast. Visitors can work their way through Atlanta’s cultural history, beginning with the Margaret Mitchell House and Museum at the intersection of 10th and Peachtree, making a stop at the fabulous Fox Theatre and ending at The Woodruff Arts Center, home to High Museum of Art, Alliance Theatre and Atlanta Symphony Orchestra. For a breath of fresh air, visitors can head to Piedmont Park – one of the largest greenspaces in the city.

North of Midtown is the ultra-chic neighborhood of Buckhead. Known as the “Beverly Hills of the East,” Buckhead is a shopping haven for fashionistas across the South. Find the latest styles from high-end designers at The Shops Buckhead Atlanta, Lenox Square and Phipps Plaza. However, Buckhead isn’t just for fashionistas. There’s award-winning dining options throughout the neighborhood, from several chef Ford Fry outposts – King +Duke and St. Cecelia – to high-end classics like Restaurant Eugene and Chops Lobster Bar.

Neighborhoods on Atlanta’s Eastside are connected by the Atlanta BeltLine Eastside Trail, a multi-use trail and greenspace that runs three miles from Piedmont Park to Reynoldstown. Along the Eastside Trail are two of the neighborhood’s newest developments, Ponce City Market and Krog Street Market. Locals and visitors alike will find chef-driven concepts alongside curated retail options.

Bordering the BeltLine, the Eastside has more than seven distinct neighborhoods. Locals stop for a pastry at Alon’s in Virginia-Highland, one of the city’s original streetcar suburbs. Inman Park combines small urban green spaces with winding boulevards lined with colorful Queen Anne and Victorian homes in the city’s first planned suburb. The scene edges into a Bohemian style in Little Five Points, where vintage dress matches the creativity of tattoos. Spend an evening in East Atlanta Village, home to a few of the city’s most-talked-about live music venues, like The EARL.

What’s old is new again in Old Fourth Ward, where this neighborhood continues to redefine itself, transforming into a hotspot for nightlife along Edgewood Avenue. Grant Park surrounds the city’s fourth-largest park and is home to Historic Oakland Cemetery and Zoo Atlanta. Once an epicenter of African-American commerce, Sweet Auburn Historic District continues to flourish on the city’s southeast side. Auburn Avenue, known in the 1950s as the nation’s most affluent African-American street, houses The Munciple Market, bakeries and clubs near the Martin Luther King Jr. National Historical Park and Ebenezer Baptist Church.